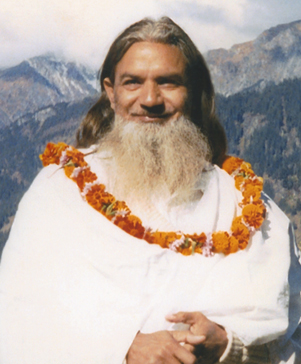 Human evolution and upliftment of consciousness do not come about through cultural or technological advance, but more by the blessing of spiritual unfoldment. In this sacred process, the Master-disciple relationship is paramount, so much so that it is known as the highest of all relationships on earth. It is the Guru who helps awaken the sleeping consciousness within each soul to the eternal Truth, the Oneness of the Divine and all creation. The Guru brings each soul a vision for an awakened life, based upon spiritual principles, through Satsang (Sanskrit: Communion with Truth), Spiritual Retreats and personal guidance.

To foster this awakening, a firm foundation is needed, based upon the principles of Dharma, which is Sanskrit for “that which upholds”—Righteousness, Truth, Divine Law. Virtues such as truthfulness, humility, faith, purity and devotion are inherently Dharmic. This is the classical path of spirituality upon which Swami Amar Jyoti guides each seeker with love and compassion toward transformation.

Reverently addressed as Gurudeva, He is a Satguru (True Guru) in the ancient and timeless tradition of the Teachers of Mankind. He has authored a number of transformational books and His published Satsangs—a treasure of the highest wisdom—comprise more than 700 spiritual discourses available on CD and Audiocasette. With sparkling humor and loving wisdom, these illuminating Satsangs cover every aspect of life and the spiritual path, revealing humanity’s purpose and ultimate goal: realization of our Divinity within.

Things don’t happen in spite of us. You and I are as important as anyone else and as responsible as anyone else. Whatever you and I do, speak or think is contributing to the entire energy of the world. 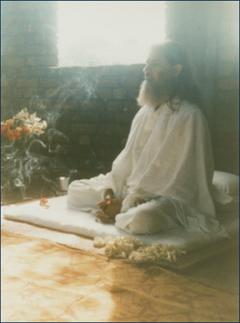 In 1960 a silent and radiant Holy Man, dressed in the ochre robe of a sannyasin (wandering monk) descended from the heights of Himalaya and began traveling the length and breadth of India in pilgrimage, living on alms and the providence of God through His fellow man. Walking on a road in South India one day, He was offered a ride by a humble and reverent man on his way to a religious conference in Madras in honor of the Dalai Lama after His exile from Tibet. The Holy Man agreed to accompany him to the gathering of learned abbots, monks and pundits and, without having said but a few words to his host, was given a special seat among those who had gathered to speak. In another city of South India, the Holy Man was asked to give Satsang (spiritual discourse), for the first time in His life, and in English, at the Vivekananda Teacher’s Training College in Tiruchirappalli. His name was Swami Amar Jyoti. 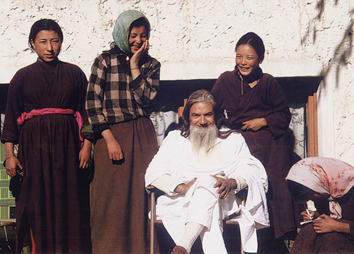 Prabhushri Swami Amar Jyoti was born on May 6, 1928 in a small town in northwestern India, not far from the banks of the Indus River. His parents named Him Rama. His childhood interests were many: science, math, music, writing, cycling, drama and sports, and He brilliantly excelled in all of these. His college education was temporarily interrupted by the crisis of the partition of India in 1947 when He transferred to a college in Mumbai (Bombay). Much beloved by family and professors, He shocked everyone with the decision to leave home a few months before graduation, saying, “I’d like to read an open book of the world for my education.” At the age of nineteen, without money or any particular destination, He took the first train He found, eventually arriving in Calcutta.

It was 1948. Refugees were pouring over the border of East Bengal (now Bangladesh) into West Bengal by the thousands each day. For some time Prabhushri worked in an aviation company in Calcutta where He was offered a partnership. Instead He chose to leave the company to become a volunteer for the refugees. Living on a railway platform near the border of India and Bangladesh, He soon headed the entire volunteer corps there, working tirelessly 20 hours or more each day. After about ten months, the flood of refugees subsided and He returned to Calcutta. There a Senator who had witnessed His work at the border offered Him a high government position for rehabilitation of refugees, but He turned it down. 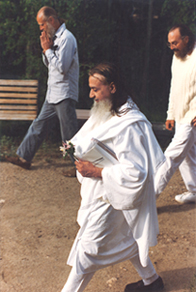 He lived in Calcutta and later on the outskirts of the city in a quiet ashram where He pursued classical music, sitar, religious studies and prayer. It was during this time that visions began awakening in Him. He began to meditate and do yoga and attended puja (traditional worship) at a nearby temple of a well-known saint. In a short while He “knew” His life work. As He described it, He picked up there from where He had left off in the last birth. Very soon, He retired to Himalaya where He lived in silence and meditation for about ten years, one-pointed on the Goal of Liberation. Many places of pilgrimage were visited during those years, walking on foot many miles each day. But a small cave at Gangotri, the temple village near the source of the Ganga River, was the place of His greatest spiritual disciplines, awakenings and, finally, Illumination.

In 1958, taking initiation of Vidyut Sannyas (lit: “lightning”—a form of monasticism that is Self-initiated) at the holy site of Badrinath of Himalaya, and taking the name Swami Amar Jyoti (Swami—Knower of the Self; Amar Jyoti—Immortal Light), He descended into the plains of India for His God-given mission to the world. The first Ashram Gurudeva founded was Jyoti Ashram, under Ananda Niketan Trust, located in Pune, Maharashtra, India. Throughout the years after leaving home, His mother had never ceased searching for Him and awaiting His return. In answer to her prayers, He settled in Pune where she could be near Him.

In 1961 He accepted an offer by a devotee to visit the United States. Again, He traveled unknown, though He soon attracted many who had never seen such a Holy Man. Eventually Prabhushri was persuaded by the sincerity of His American disciples to establish an Ashram, and Sacred Mountain Ashram was founded in 1974 followed in 1975 by Desert Ashram under Truth Consciousness, a nonprofit organization that serves as a vehicle for Gurudeva’s work in the United States.

The spiritual awakening on earth that Gurudeva reveals is the glorious destiny of mankind, once freed from our limited identity of self. Lovingly and ceaselessly, He continues to uplift and purify each of us for this awakening, for His way is the ancient relationship of the Guru to the disciple, the candle lit directly from the burning flame of Truth. Prabhushri constantly reminds us that we are at a breakthrough into a new age, where religions will be transformed into direct awakening and communion with our Highest Source. Like a mother whose love knows no bounds for her child, the Guru guides and nurtures the disciple on his or her own path to perfection, revealing in Himself the attainable Reality of God Consciousness. 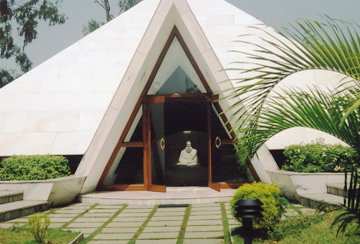 After four decades spent in continually traveling, giving Satsang and Retreats, establishing Ashrams and guiding innumerable souls to higher consciousness, Gurudeva took Mahasamadhi—conscious release of the mortal body—on June 13, 2001 in Louisville, Colorado. According to His wishes, His Asti Kalash (urn containing Sacred Remains) was brought back to Jyoti Ashram by disciples from India. Within a year, a Samadhi Sthal in the form of a pure white marble pyramid was created for permanent consecration. It has thus become a beacon Light, a place of pilgrimage and meditation for all who are blessed to enter there.

The dedication of the Samadhi Sthal was conducted during five days of elaborate Vedic pujas and fire ceremonies attended by hundreds of devotees, from June 9-13, 2002. At the end of the dedication, the Brahmin priest who led the pujas enunciated the following: “As long as the sun and the moon and the stars and water (symbolic of life) exist, may this Samadhi Sthal be the Illuminator of millions of souls, and may You continue to guide and bless us.” Immortal Light: The Blissful Life and Wisdom of Swami Amar Jyoti, a Biography In His Own Words was published in June 2004 and is available in three editions in the Publications of this website.